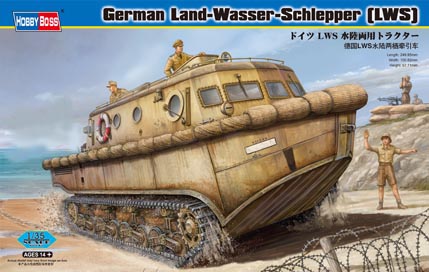 German LWS amphibious tractor Early production 82430Model:82430The proportional model:1:35Browse the number:3129Add to FavoritesCommentProduct introduction: Development of the Land-wasser-schlepper (Land-Water-Tractor) started in 1936, but the first 7 vehicles were completed in July of 1940. An additional 14 were produced by March of 1941. It was designed by Rheinmetall-Borsig as an amphibious vehicle for use by engineers but it lacked storage and loading/unloading access. To overcome this problem, special 10 and 20 ton amphibious trailers were made. It carried 3 to 5 men crew and 20 passengers. Another problem was that it was unarmored and could not operate effectively in the combat area. LWS saw service in Russia and North Africa . Parament Item No 82430 Item Name German LWS amphibious tractor Early production Bar Code 6939319224309 Scale 1:35 Item Type Static kit Model Brief Length: 249.95mm Width: 100.82mm Height: 67.71mm Total Parts 237pcs Metal Parts n/a Photo Etched Parts one sheet photo-etched parts Film Parts Punched Window mask Resin Parts n/a Total Sprues 4 sprues plus lower hull ,cabin , deck and tracks Camouflage Scheme All of the LWS, I have seen with one exception were painted Dunkelgrau (Dark Gray), and the excepyion was painted Dunkelgelb (Dark Yellow). There Released Date 2008-07 More Features Summary: The German LWS was built to carry up to 20 men and a crew of 3, and it could also tow a floating trailer carrying a vehicle or some form